I have been out and about over the last week not just in the woods and beaches but also in some wonderful cities with beautiful buildings.

Lincoln Cathedral is stunning, it sits on top of the hill dominating the surroundings . The stone is a soft colour and has been worked beautifully.

The stone was quarried very close to the cathedral and tells an amazing tale .

The rock that the cathedral is built from is the inferior Oolite Lincolnshire limestone. This was formed in warm shallow seas in the middle Jurassic (174-163 million years ago)

It is made of Ooliths these are tiny spheres of calcium carbonate rather like sand grains.

The Cathedral stands on an escarpment of this rock.

This limestone was first quarried by the Romans to build a hilltop fort. Bishop Remequis used The limestone in 1072 to build the cathedral. He built it across a fault line and in 1185 it was partially destroyed in an earthquake. The cathedral quarry is a mile north. Recently with constant work needed on the cathedral has meant the quarry has been running out of the limestone,so other areas have been searched out by geologists to match the stone. Large areas are now built over and the rock is inaccessible.

Some of the carvings in the stone are fantastic, I loved this creature on the adjacent song school.

Yesterday I was in Bath and marvelling at Bath Abbey a lovely yellow colour . It is built of Bath Stone . Interestingly Bath Stone is Oolitic limestone laid down in a shallow sea. Sound familiar ? If you look at the map of the middle Jurassic above with Lincoln on it you will also see Bath ! I have travelled in time from Lincoln to Bath on a Jurassic wave !

Bath Abbey was founded in the 15th century but is on the site of an Anglo Saxon monastery from 757 which was pulled down by the Normans who started a Cathedral in 1090 which fell into ruin and parts became incorporated into today’s Abbey. 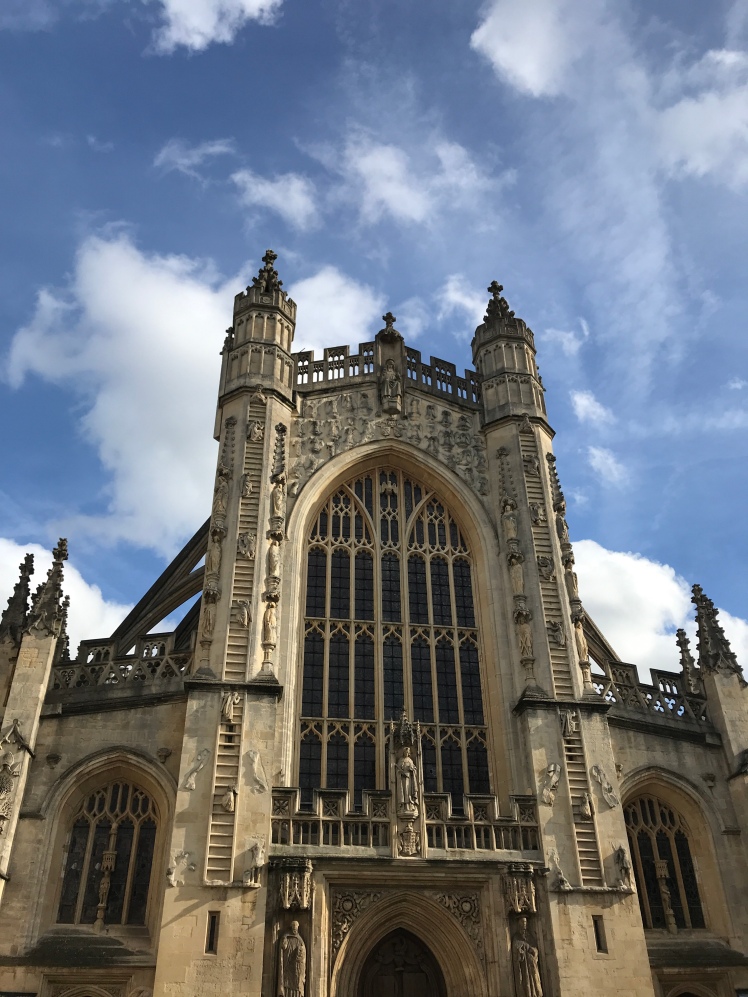 The front of the Abbey has amazing ladders of Angels on either side. These were designed by Oliver King the Bishop of Bath after a dream about Angels ascending and descending above him.

These two amazing buildings have a hidden link , the warm shallow sea of the middle Jurassic and the warm coloured Oolitic limestone that was laid down.

2 thoughts on “Stories in Stone”