We have been in France for a few days in super hot weather. Walking around the air was heavily scented, wonderfully perfumed. There were no obvious flowers but on looking up I realised the trees were laden with flowers. 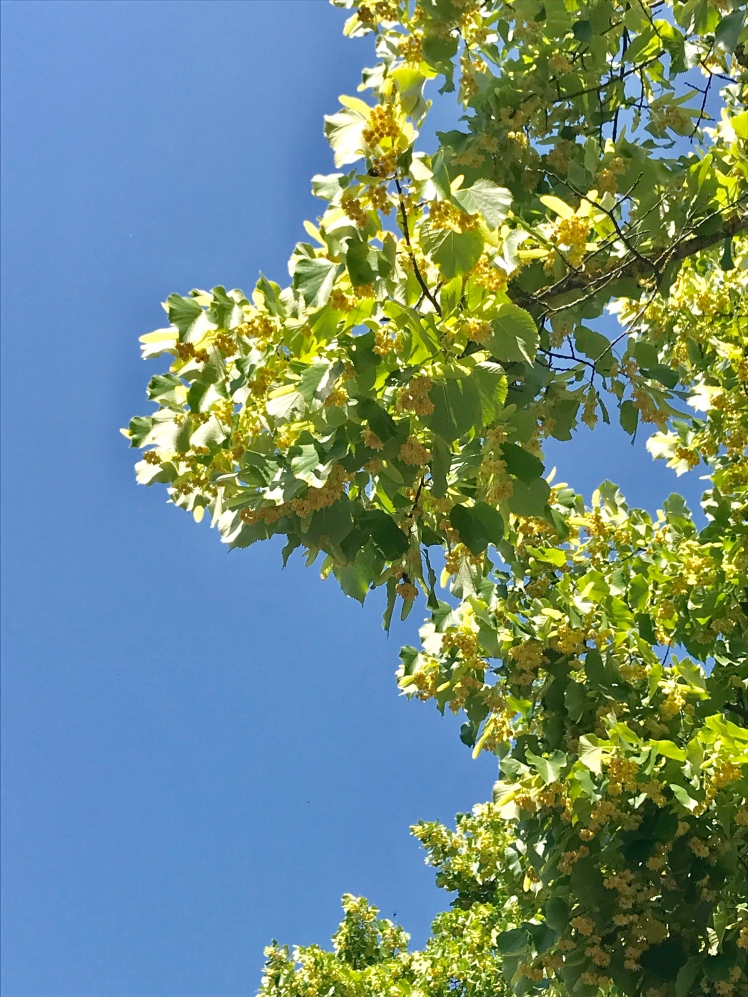 The trees were lime trees with heart shaped leaves and clusters of creamy flowers. There were large numbers of bees throughout the trees.

The lime tree attracts bees for the nectar the trees also host large numbers of aphids that exude honeydew . If you park a car under a lime it can have sticky honeydew cover it.

Interestingly the small leaves lime was the predominant tree in forests in Britain after the ice age. They are now uncommon and the hybrid limes are common.

The nectar of some limes (silver limes) is thought to be toxic to bees or have a narcotic effect on them. An article from Kew Gardens looks at the chemicals in the nectar and found that silver lime contains high levels of caffeine. Some nectar contains toxins making it only useful to pollinators that are tolerant to it and deterring others. A theory is that bees return to flowers when there is no nectar and become exhausted and die.

Lime tree scent is so sweet that the trees were planted for there therapeutic qualities near hospitals, in rural areas in Europe mothers used to walk under the trees with babies in prams for the perfume.

The wood of the lime tree is pale , flexible and doesn’t splinter.The wood is good for carving and has been used to make piano keys. The tree can be coppiced to produce staves of timber. The sticks of Morris dancers are made from lime. In Europe the flowers of small and large leaves limes were used to make herbal tea.

I will be looking out and sniffing out some lime trees in this warm weather.